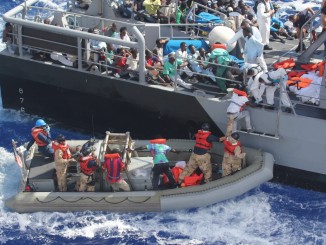 The Italian people are renowned for their kindness, generosity and large humanity and currently they are demonstrating this spirit of charity and welcome on an epic scale as their navy has rescued from drowning at sea 150.000 migrants fleeing from instability, poverty and wars all across North Africa and the Middle East. I have just read a report in an … [Read on]

We’re all going to lose our marbles – well, at least we’re going to be classified as all having lost our marbles. Why? Because the government – using our money, as usual – will pay your GP £55 for every case of dementia he diagnoses. Given the aging population, that’s quite a nice little earner for the doc. Expect the … [Read on]

Facebook and the internet are certainly bringing the intrinsic decency and sense of fair play of the British into prominence, as well as their refined use of language. In response to the news that a man was stabbed to death in Basildon, apparently by a gang of young people, the internet commentators did not wait for a guilty verdict by … [Read on]

Fiona Woolf is being interviewed by a House of Commons Select Committee concerning her eligibility to be chairman of a new enquiry into historic child abuse. Charities supporting the victims of such abuse have objected to Mrs Woolf’s appointment on the grounds that she is too close to the very Establishment which is suspected of covering up the abuse. They … [Read on]

Gaily Islam’s Garden Path with the General Synod ?   It’s just one triumph after another for the General Synod these days. Yesterday they passed regulations to allow women to be consecrated as bishops by the end of the year. Today, another showstopper: they have invited Fuad Nahdi a man with connections to Muslim terrorist organisations to be the first … [Read on]

The headline to a story in the Times of 29 September caught my eye: ‘Acid attacker drove 300 miles for revenge but got the wrong man’ Apparently, then, there was a right man to have got with his acid attack. A painter and decorator called David Phillips drove from Cornwall to Sussex and threw acid in the face of a property developer called … [Read on]