Yemen is a country of paradoxes. In classical times it was called Arabia Felix – but today it is a most unhappy place. The people are generous – yet they have nothing to give. They are hospitable – but many of them have not the wherewithal to be hosts, their houses having been destroyed by the three-year old war that … [Read on]

When the BBC smugly announced that two ‘British’ Jihadists with Arabic names accused of torturing, crucifying and beheading unarmed civilians had been captured in Syria, many British listeners were enraged. What could be less British? What would foreigners think we as a nation had come to? This type of slap in the face is intentional, frequent and part of the … [Read on]

Sir Richard Body, (known to his friends as Dick) was a good friend to the Review over many years, providing new contributors – including himself, ideas, generous hospitality and suggestions about raising money. He also helped us put the magazine on a secure business footing. He was an outstanding parliamentarian in the days when some Members like him were not … [Read on] 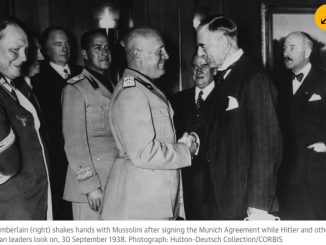 Following the attempted murders in Salisbury and under Foreign Office guidance, the UK’s full retaliatory powers will consist of sending home 23 diplomats from the Russian Embassy and putting the squeeze on funny money (unexplained wealth) coming here from Russia. Perhaps not so much a squeeze as a light tap on the knuckles. Mrs May might also recall the British ambassador … [Read on]

In scenes reminiscent of Nazi thugs smashing a Jewish shop in Berlin, Antifa an allegedly antifascist organisation dedicated to the intimidation and silencing of political opponents, broke up a public discussion about freedom of speech between Sargon of Akkad and Israeli Professor Yaron Brook of the Ayn Rand think tank at Kings College London last week. Wearing balaclavas and equipped … [Read on]

Mervyn Matthews was a long-time subscriber to the Salisbury Review, frequent contributor and the author of several books about his unusual life. He was raised in depressed Swansea, vividly described in Mervyn’s Lot, went to Manchester University and thence to Oxford where he looked forward to a successful academic career. However, his personal life was as dramatic and tragic as … [Read on]

And the Weak Suffer What They Must? Europe, Austerity and the Threat to Global Stability, Yanis Varoufakis, The Bodley Head, 2016, £16.99. Ten years ago, if Turks took the ferry to that Aegean island where burning Sappho wept and sung, they were greeted by patronizing customs officers who had been instructed to say ‘welcome to Europe’. Now, if they go … [Read on]

I have a small confession to make: I have been telling folks around here that The Salisbury Review is ‘the Queen’s favourite magazine’. I didn’t mean to deceive, not at first. It started with just my mother-in-law. She had been gaining ascendancy over me lately. She was soundly winning the propaganda war for the heart and mind of my wife. … [Read on]