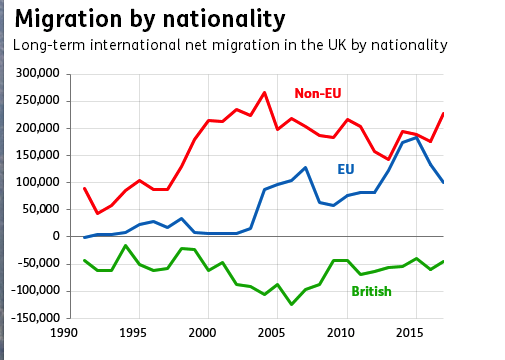 Let us open our borders to those ‘who will contribute’. Let us welcome ‘the brightest and the best’. Let us open our doors to ‘the best talent from across the world’. We need an immigration system that meets ‘the needs of our economy’. This is the true meaning of Brexit. No longer will we discriminate against non-EU citizens who might ‘contribute’. Welcome to ‘Global Britain’!

This exciting message is the mantra of the liberal establishment, and home secretary Javid spelled it out again last week. A key reason people voted to leave the EU, he argued, was to regain ‘the ability to choose who can and cannot come to our country’. He went on, ‘the message was never that we should turn our back on our values as an open and outward-looking country. Immigration has been good for Britain – it has made us a global hub for culture, business and travel and has boosted our economy in countless ways’.

May will go all out next week to flog this message in the run up to the House of Commons vote. Her deal will deliver ‘an end to free movement’, and, specifically, an end to uncontrolled low-skilled migration. Naturally, there will need to be ‘broader arrangements’ to ensure the economy ‘has the low-skilled labour it needs’. And, yes, the precise nature of the arrangements has yet to be agreed with our European partners, so there will inevitably be ‘compromises’ as in any negotiations, mainly on our side, to avoid the catastrophe of ‘no deal’. But we can rest assured that the ‘fundamental tenet’ of the new immigration system will be that it should not afford ‘specific preference to EU citizens’; and this has been agreed (at least in spirit) with our European partners.

In cabinet, ministers have been pressing for months for the ‘shortage occupation list’ to be extended to cover such sectors as IT, engineering, teaching and health. A strong argument can be made to extend the list to encompass hospitality (90,000 vacancies unfilled) and social care (130,000 vacancies unfilled): difficult to justify our elderly being left to rot in unstaffed care homes because those who would care for them cannot be classified as ‘the brightest and the best’. In which case, why not extend the list indefinitely and add the building trade, plumbing, lorry driving, waitering, dog-walking and swimming instructing to the shortage list?

But wait a minute. My impression is that the indigenous population’s concern about immigration takes a somewhat different form from that depicted by Javid. They couldn’t care the toss about ‘global Britain’ attracting ‘the brightest and the best’. They think there are too many people coming into the country. They feel, increasingly, that they are strangers in their own homeland. They think that importing millions upon millions of immigrants has exacerbated the housing shortage. They don’t want their countryside carpeted with high-density housing developments to house an ever-expanding population fuelled by immigration. They resent it that East Europeans living ten to a house can minimise their living expenses, sure in the knowledge that their savings will have five times the purchasing power back home (enabling them with the greatest of ease, to put down the deposit on a house in Slovakia or Romania ), and undercut them in the labour market; whereas they can no longer afford to make ends meet, let alone rent a flat or put down the deposit on a house in Britain. They don’t think it makes sense for the government to have to subsidise people in work because their wages are so low. They don’t think that all migrants are paying their taxes, but that many are working cash in hand (as in the building trade), and that others are claiming benefits to which they are not entitled. And finally, they would rather that newcomers who choose to settle here permanently either shared their culture and way of life, or showed a willingness to integrate, as opposed to live parallel lives in parallel communities – because they wish to live in settled communities where they know and trust their neighbours, not in a ‘global hub’. In short, they want their country back.

As for shortages, let there be shortages! Let employers who cannot offer a decent wage (i.e. a wage that enables a person to put a roof over their head) go out of business. Let employers train new recruits and invest to raise their productivity, instead of relying on cheap labour and imported skills. Let pampered bourgeois liberals pay more for their delivery van drivers, gardeners, dog-walkers and nannies. And if they have to look after their own children, so much the better.

We managed perfectly well in the 1980s and early 1990s when net immigration approached zero. We will do so again.

6 Comments on The Flood